Welcome to our City of Hamilton Plan web page!

On this page you will find information relating to the preparation of a new land use plan for the City of Hamilton. We will post updates here at key stages during the plan preparation process and will also provide details of any community consultation events. We hope that you will take the opportunity to contribute to the plan-making process.

The current plan for the City of Hamilton is the City of Hamilton Plan 2015, which was adopted in June 2016. Given the time that has since past and the wide ranging impacts of the pandemic, it was determined in late 2021 that it was time to take a fresh look at the City. The review that we have undertaken has not only been driven by analysing the data that we have collected, but also by an acknowledgement of some of the opinions that we have received from stakeholders in recent years.

We believe that it is important to continually review how the planning system is functioning and monitor if it is fit for purpose. As a Department, we carefully and consistently analyse planning decisions and how the established policy context is being applied in practice. Through time, this builds up a body of knowledge and opinions which can be used to inform policy direction. From the outset of this plan making process we were of the opinion that a fresh and new approach was required and the City of Hamilton Plan 2022 (Consultative Draft) represents the first stage in that process.

The Plan has been written to provide a clear indication of what the Department believes to be logical and informed policy directions. However, we are also aware that the Plan presents new issues and different approaches and we’re keen to hear people’s thoughts on the ideas presented within the document.

The Department is aware of concerns raised during previous plan preparation processes, most notably in terms of going directly to the stage of issuing an operative draft plan without any prior community engagement. The Department acknowledged these concerns and pursued a different approach in the preparation of the North East Hamilton Local Plan 2022, whereby the draft version of the plan was issued as a non-operative document. We wanted to further our consultation efforts with the preparation of a new city plan to maximise opportunities for public influence and have therefore introduced a new stage to the plan-making process, paving the way for earlier community engagement.

The City of Hamilton Plan 2022 (Consultative Draft) is the first document of its kind in Bermuda. It has intentionally been written with minimal jargon to provide a clear indication of why particular policy decisions have been made. However, it is important to note that although the Department believes there is strong merit in pursuing the policy approaches outlined within the plan, they are not fixed and we are keen to hear what people think about the suggestions we have made.

Consultation on the City of Hamilton Plan 2022 (Consultative Draft) commenced on XX August, 2022 and will run until XX October, 2022. During this period we want to hear from as many people as possible on the content of the plan. Where we think we can reasonably address any concerns raised, we will contact those individuals. The next stage in the process will be the preparation of the draft plan, which is a legislated stage of the process. Alongside the draft plan we will publish an updated version of the City Survey Report, which will contain a summary of the issues raised through the current City of Hamilton Plan 2022 (Consultative Draft) consultation phase, alongside the Department’s responses.

The draft plan will provide a more solidified representation of what the Department considers the final, adopted version of the plan should look like. However, this stage also provides a further opportunity to make submissions to the Department in the form of either an objection or representation. Where we are in receipt of objections, we will contact those individuals where we believe there is scope for reaching a resolution prior to proceeding to an objections tribunal.

A tribunal will be held where there are any remaining objections which could not be resolved. This provides an opportunity for both the objector and the Department to present their case and for the members of the tribunal to ask any questions. The tribunal will then provide the Minister with a report outlining its recommendations. The Minister will have the final decision on how to proceed with each of the objection cases, and in terms of the overall final content of the plan.

The City of Hamilton Plan 2022 (Consultative Draft) is available in either PDF or Story Map format. The Department would encourage using the Story Map version as it is easier to navigate . In addition, you can also find the City Survey Report 2022, which contains much of the research that went into the preparation of the Plan:

Tribunal period, including consideration of objection/representation cases by the Tribunal

Presentation of the Plan to Cabinet, House of Assembly and the Senate

To comment on the City of Hamilton Plan 2022 (Consultative Draft) you can either access the Story Map version of the Plan (see above link) and answer the questions within the Story Map, or email us at cityplan@gov.bm.

Please note that this is not the draft plan stage. The purpose of this stage is to attempt to address any issues before getting to the legislated draft plan stage. Anyone wishing to speak at the objections tribunal will be required to submit an objection or representation to the draft plan, details of which will be provided in the coming months.

The City of Hamilton Plan 2022 (Consultative Draft) proposes a fundamentally different approach to land use planning, placing greater emphasis on creating successful places which have a strong sense of place and identity.

To stimulate interest in this approach we have decided to hold a design competition, which we hope will excite, inspire creativity and exemplify how placemaking principles can add value to an area.

The competition relates to the four Strategic Development Sites identified within Section 5.8 of the Plan. Submissions can be made in respect of one or all four of the sites and should:

The deadline for all entries is X. Hard copies can be submitted to the Department of Planning and electronic submissions can be emailed to cityplan@gov.bm.

A panel of 3 judges made up of the Corporation of Hamilton, the Department of Planning, and an international expert in urban design will select the winning entries. There will be a winner for each of the four Strategic Development Sites. 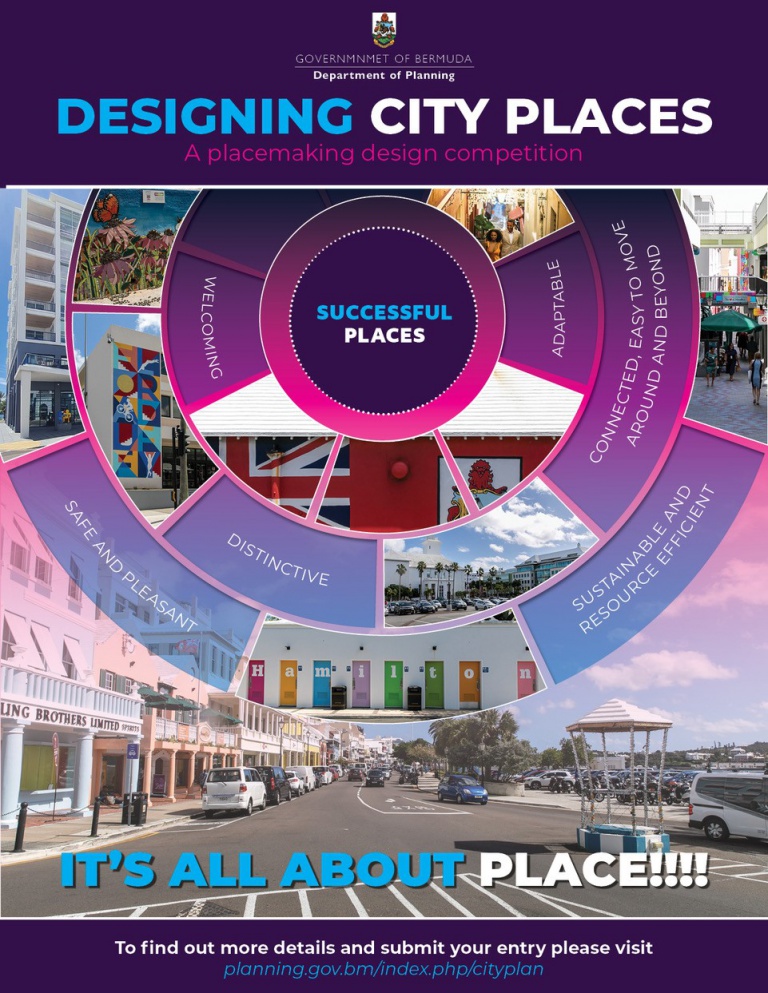