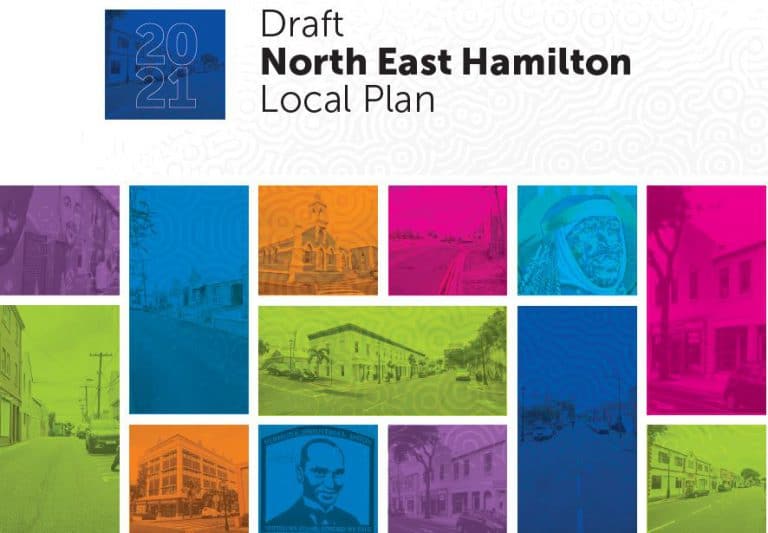 What is a local plan?

A local plan sets out the vision and policies which guide the future development of an area, addressing needs and opportunities in relation to housing, the economy, community facilities and infrastructure. It also acts as a basis for safeguarding the environment and securing good design.

In short, a local plan sets out all of the policies which are used to assess and determine planning applications.

Why does North East Hamilton need a local plan?

The City of Hamilton Plan 2015 sets out a commitment to the preparation of a local plan for North East Hamilton, stating that the area “has a distinct urban fabric which makes it worthy of its own local plan.”

North East Hamilton has long been identified as an area which merits a tailored approach to the use and development of land due to the social, economic and environmental disparities which have arisen between this area and other parts of the City.

What research has been done to inform the Plan?

The Plan has been prepared under the umbrella of the City of Hamilton Plan 2015 for which a ‘Report of Survey’ was undertaken, identifying key statistics and trends for the entire City, including North East Hamilton.

A series of workshops were held in 2015 to obtain the views of the local community on what a local plan for the area should look like. Information from these sessions has informed key components of this Plan. Consultation has also recently been carried out with various Government and non-Government stakeholders.

In recognising that it has been some time since a widespread public consultation exercise has taken place, the Department has decided that the Plan will not be operative until the public consultation phase has concluded and the Department has fully considered all information submitted. The Department wants to hear the opinions of local stakeholders before releasing an operative version of the Plan to ensure that the document is shaped by the local community.

What status does the Plan hold?

The Plan is not an operative document and therefore cannot currently be used in the determination of planning applications.

What does the Plan seek to achieve?

This Plan has been designed to facilitate economic investment in the area whilst respecting the existing character and sense of community of North East Hamilton. The ultimate intention of the Plan is to make North East Hamilton a more appealing place to reside, establish a business and visit.

How does this Plan differ from other plans in Bermuda?

The Plan provides a new approach to the application of planning policy in Bermuda whereby decisions will be made through carefully balancing the content of the Plan as a whole. This approach will ensure that proposals cannot automatically be deemed acceptable simply because they meet all of the numerical requirements of a plan. The proposed approach allows for a closer inspection of the more intangible elements of a proposal, such as design considerations. The approach also ensures that there will be no instances where a planning application which is otherwise considered acceptable, has to be refused because it fails to meet the terms of single policy.

In addition, this Plan places greater focus on community benefits, which may include contributions from developers for improvements to the area, and introduces the concept of development opportunity sites where specific properties can be identified and promoted for new development.

What does the Plan mean for me as a resident of the area?

The Plan requires careful consideration of the impacts of any development upon the amenity of the surrounding area and ensures that residents are made aware of development proposals near to their property.

The Plan sets out a renewed focus on seeking to accrue community benefits from development activity, ensuring that development not only mitigates its own impacts but also invests in improving the surrounding area. Whilst there are a number of options for the types of community benefits we would be looking for, from a broad perspective we hope that they can be used to enhance the environmental and social qualities of the area. For example, improving existing open spaces or addressing any street lighting deficiencies.

What does the Plan mean for me as a local business owner?

One of the key objectives of this Plan is to increase economic activity within this area, which we hope will be achieved through implementing a flexible approach to decision-making on planning applications. We hope that this approach (which is not currently employed anywhere else on the Island) will entice developers to invest in the area and thereby increase footfall. More people living and working within the catchment area of local businesses provides an opportunity for increased expenditure in those businesses. The flexible approach employed within the Plan would also ensure that there would be no undue restriction on new uses and there would be reasonable scope for the expansion and/or diversification of existing businesses.

How can I make a comment on the Plan?

Comments should be submitted through the Customer Self-Service portal. Please note that you will have to register an account before submitting your comments. If you have any difficulties with this process, please contact our Information Systems Officer on 294-9061.

Following the official consultation phase (2nd August until 8th October), members of the public will be afforded the opportunity to review and comment on any objections which are received. The Department will contact all objectors and counter-objectors where there is considered to be a possibility of reaching a mutually satisfactory resolution. If a resolution cannot be reached, a Tribunal will be appointed by the Minister of Home Affairs which will set out its recommendations to the Minister. The Minister will then take a position on all objections before presenting the Plan to the Legislature for formal approval.