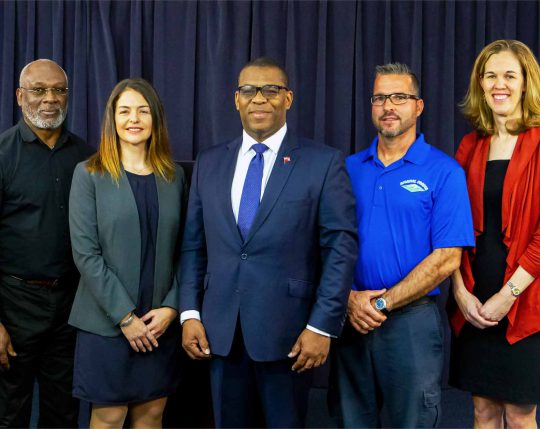 THE MINISTER OF HOME AFFAIRS. THE HON. WALTER ROBAN JP MP ON DEPARTMENT OF PLANNING UPDATES

Today I am pleased to provide you with two exciting updates regarding the Department of Planning’s continued efforts in working to better serve the public.

I am joined by my Director of Planning Ms. Victoria Pereira.

This week, the Development and Planning (Delegation) Notice 2020 was signed by myself and the DAB Chair and sets out specifically which types of applications are to be determined by the Board and which may be determined by the Director, moving forward.  The latter are essentially applications that are straightforward and compliant with the current development plans for the island.

It is anticipated that this change, known as the Scheme of Delegation, will greatly reduce processing times by allowing internal approvals for those fully compliant applications and those only requiring minimal discretion.

The goal is to streamline processes so that these applications no longer have to go through the Board, which meets every two weeks.

However, the types of applications that will still be sent to the Board to approve or refuse will be:

In addition to this list, the Director may refer any other application which, for any reason, the Director considers should to be determined by the Board.

Similarly, the Board may decide certain applications may be better determined by the Director.

It should be noted that the Board will still have sight of any and all applications they wish to view and the Chairman will be advised as to which applications have been approved under the Scheme of Delegation. The Board may review and decide any application which would normally be determined by the Director.

You will be reminded that, in May of this year, I read a statement in the House of Assembly entitled, “Streamlining the Planning Process”. It was in this statement that I outlined a series of measures to be introduced which would support the construction and development industry over the next year…one of these was the Scheme of Delegation which I have just highlighted.

I am happy to report that we are now on the final stage of finalizing the Plan. As part of the Plan’s public consultation component, the Department of Planning invited the public to review and submit objections and comments on the Plan. Members of the public were then invited to submit counter objections to any objection. Any objections that are unresolved will be referred to a Tribunal to hear the details of each case.

The tribunal is an independent and unbiased group whose role is to hear all arguments and make a recommendation to the Minister as to how to proceed. Following the final decision by the Minister on all objections, the plan will proceed to the House of Assembly for approval in order for the Plan to be adopted as Final.

It’s important to have the Bermuda Plan finalized and implemented in order for landowners to proceed in making plans for development. I know that individuals may have put their applications on hold – waiting for the new plan to come into effect – to see if there will be any changes to particular zonings, etc.

It is expected that the tribunal will conclude their work this summer.

In closing, I wish to thank the Director and her team for their continued diligence and commitment to the people of Bermuda.

This Government recognizes the crucial role that the Department of Planning plays in facilitating and supporting new investment and, as such, is desirous to improve procedures that will result in more efficient decision-making and, generally, unburden the application process.

You will be hearing many more progressive changes coming out of the Department of Planning shortly.

PROMOTION: Matthew Trott promoted to the post of Planner